Hello there. This is Minglu.

12th International Symposium on Parallel Architectures, Algorithms and Programming (PAAP’21) was held from Dec. 10th to 12th.
PAAP is an international conference for scientists and engineers in academia and industry to present their research results and development activities in all aspects of parallel architectures, algorithms and programming techniques.
You can find the details here. Program

In our lab., Minglu had a presentation at the track05: Big Data Processing and Deep Learning. 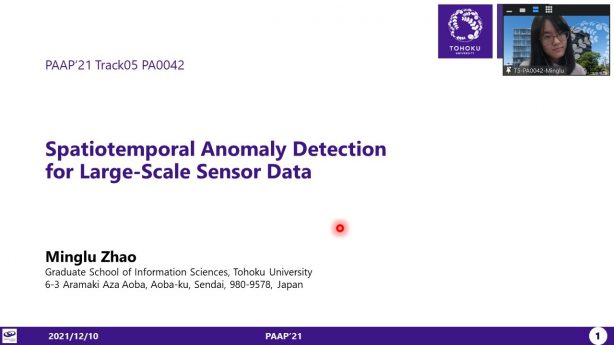 Hi, I’m Keichi Takahashi. I’m excited to announce that I have joined Takizawa lab this December as an assistant professor.

Prior to joining Takizawa laboratory, I was an assistant professor at the Nara Institute of Science and Technology (NAIST), and conducted research on accelerating inter-node communication and storage I/O in large-scale HPC systems. Please visit my website to check out my latest list of publications and software projects.

I am looking forward to working with the students, faculty, and staff at Takizawa lab in the future!

The International Conference for High-Performance Computing, Networking, Storage, and Analysis (SC21) was held from Nov. 14th to 19th this year.

Similar to last year, Tohoku University had a booth page including posters and videos about our research.

Although there is no presentation made by lab members this year, students in our lab still actively attended the conference and shared interesting topics or presentations in the lab seminar.

Hope that in the future, there will be opportunities for our lab members to present research at such top-level conferences.

I am Shuhei Sugawara, a first year Takizawa trainee.
In light of the recent situation, we have created a system to record the arrival and departure status of students in the laboratory, and have recently started operation.
Previously, we had to write down the entry and exit times of each person on a spreadsheet, but now we can use the touch keys in the lab to automatically fill in the information, which I think is much easier and less time-consuming.
It was more difficult than I expected due to various problems and improvements before the system was up and running, but it is now working successfully thanks to the cooperation of the lab members. Thank you very much!
For now, only lab members can use it, but we are planning to improve it so that guests can also use it, so please try it out when you visit our lab! 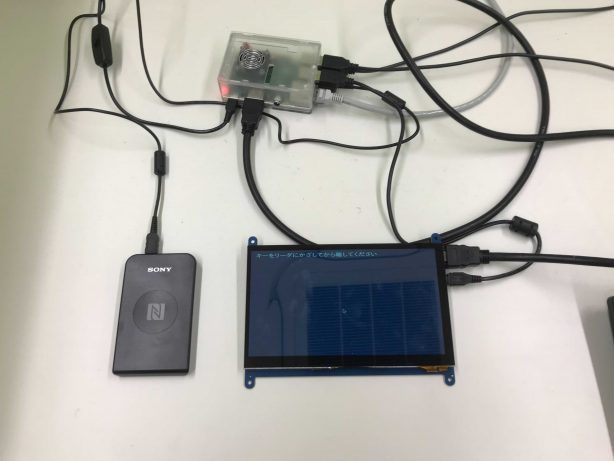 The book “Software Auto-Tuning: Code Optimization Techniques for Scientific and Technical Computing” authored by Prof. Hiroyuki Takizawa (co-author) will be released soon! The book introduces the principles and usage of each tool for software auto-tuning. We recommend this for your research or lectures to improve your work!
https://www.morikita.co.jp/index.php/books/mid/087221 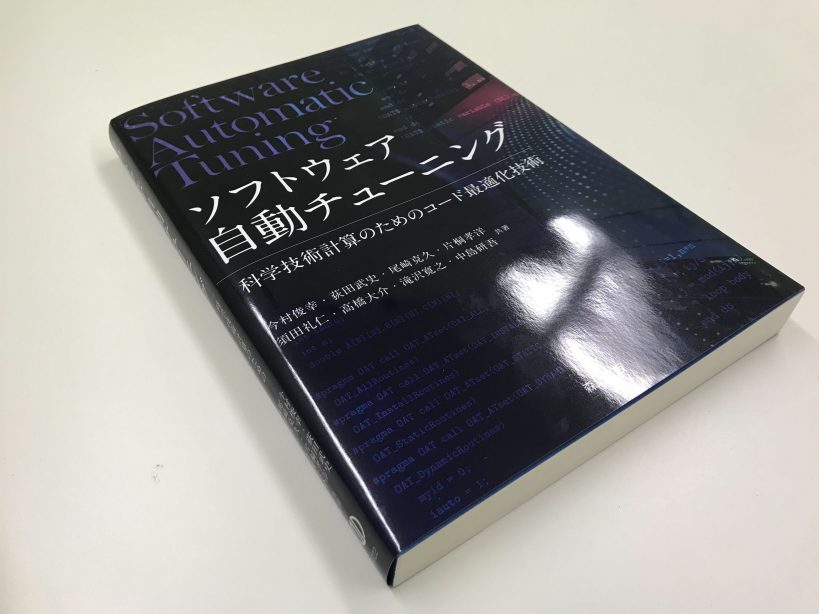 The entrance exam for graduate school was conducted at the end of August.
Thank all B4 students for your hard-working.
In our lab, we have been given 3 months to prepare for this entrance exam. There are many examples of past questions from our seniors.
B4 students are now working hard for their graduation research!

Hello, this is Ishii, a 4th-year undergraduate (B4) student.

Recently, three B4 students in our lab successfully passed the entrance exam for graduate school, congratulations!
To celebrate the good news, our lab had a party on September 15th.
Although the party was held virtually due to the COVID-19, we really enjoyed it and had a great time.

After passing the exam, I am still going to do my best and get well-prepared for becoming a graduate student.

HOT CHIPS is one of the semiconductor industry’s leading conferences on high-performance microprocessors and related integrated circuits. This year, the latest technologies and products were introduced and presented by engineers and chip designers from famous corporations and national laboratories. The conference was held virtually from August 22nd to 24th.

It had several sessions including CPUs, data processors, machine learning platforms, and etc. There were many innovations and technical improvements introduced in high-quality presentations.

This year, several top-level corporations brought their new CPUs. Here, I am going to share some topics I am interested in and my impressions.

Alder Lake is the newest generation of Intel Core processors. The core design is totally different from the past. It uses two different cores with different architectures, P-core and E-core, to achieve the performance hybrid. 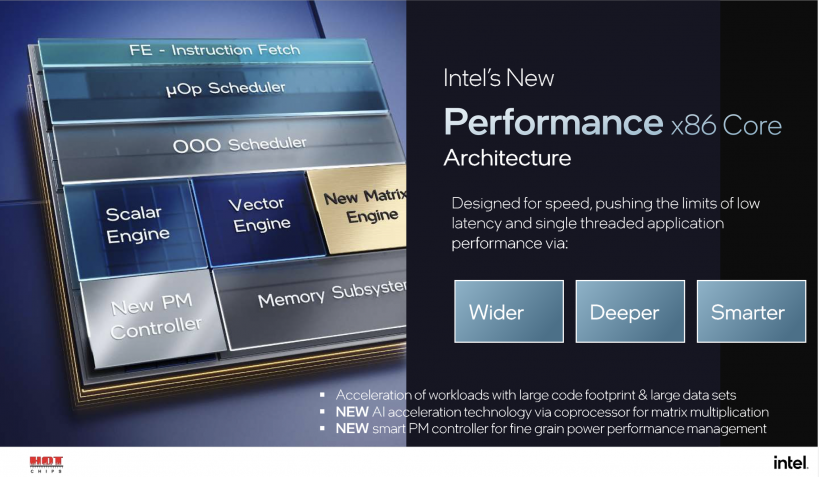 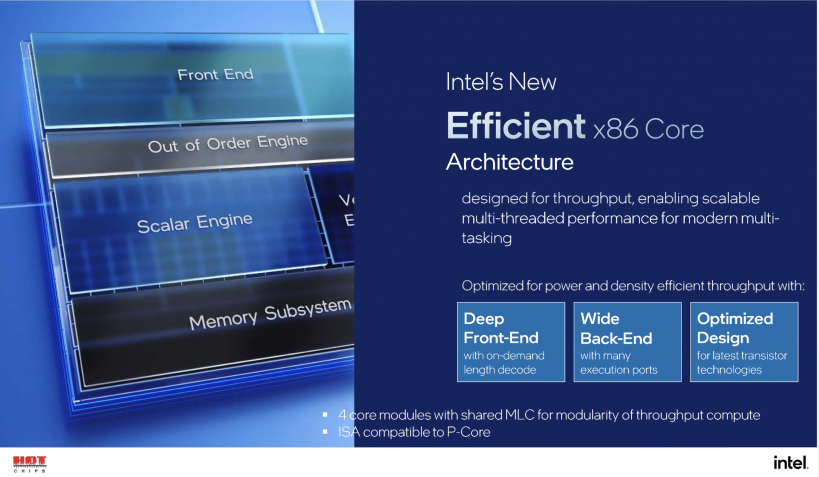 P-core delivers higher performance on single and lightly threaded scalable applications, while E-core provides better throughput on multi-threaded applications. For the scheduling, Intel uses the Thread Director to put the right workload on the right core at the right time. Based on the IPC differences between P-core and E-core, applications are classified into 4 classes. The information on energy efficiency and performance is periodically written into the EHFI table. Then the OS scheduler selects the best core allocation. The Thread Direct architecture is shown as follows. 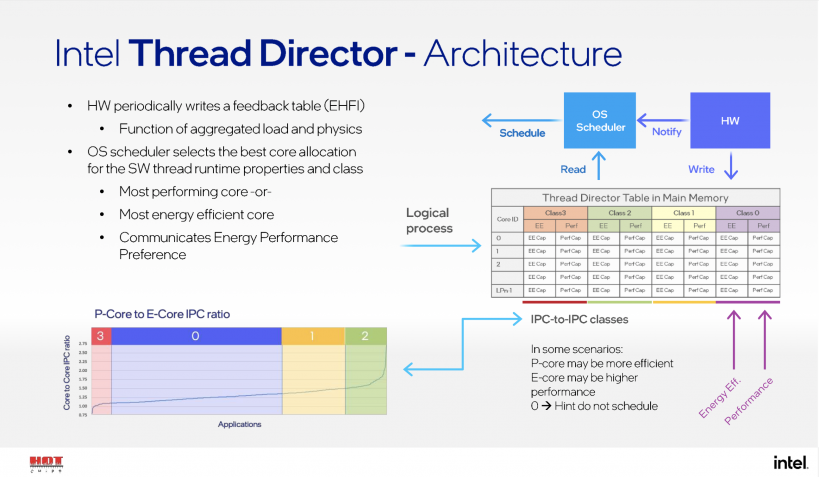 Compared to Zen2, the new generation achieves 19% IPC improvement, which is awesome. The figure shows major changes in Zen3. 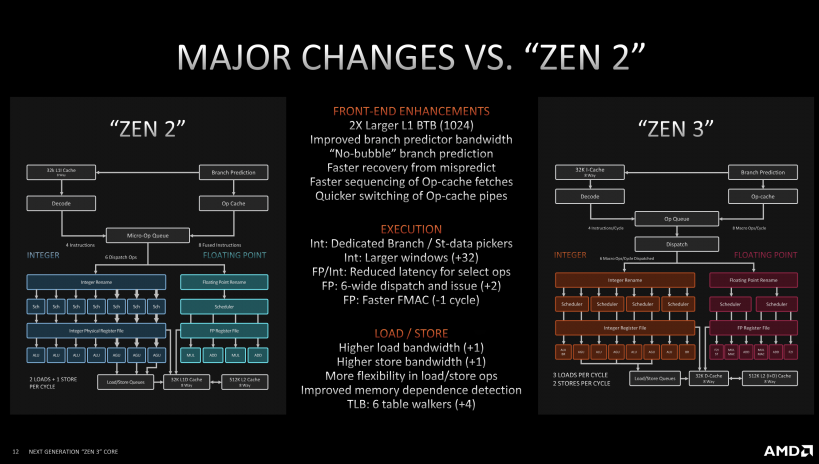 The most interesting part for me is the Zen3 cache hierarchy. Although the total size of the L3 is not changed, the direct accessibility per core becomes twice, which brings the reduction in effective memory latency. The outstanding misses of L2 and L3 are also amazing.  Besides, their 3D V-cache technology makes the L3 192MB, which is a surprising capacity.

The new IBM Z system is quite different from Z15, especially the cache hierarchy. Each core has a private 32MB L2 cache, which is 8 times larger than the L2 cache in Z15. However, in Telum, there are no physical L3 and L4 caches, instead, IBM uses L2 to generate virtual L3 and L4 caches. This inspiring design greatly saves chip areas and latencies of L3 and L4, while still remains their functions, and further improves cache size per core. With such implementation, the system can achieve over 40% per socket performance growth. 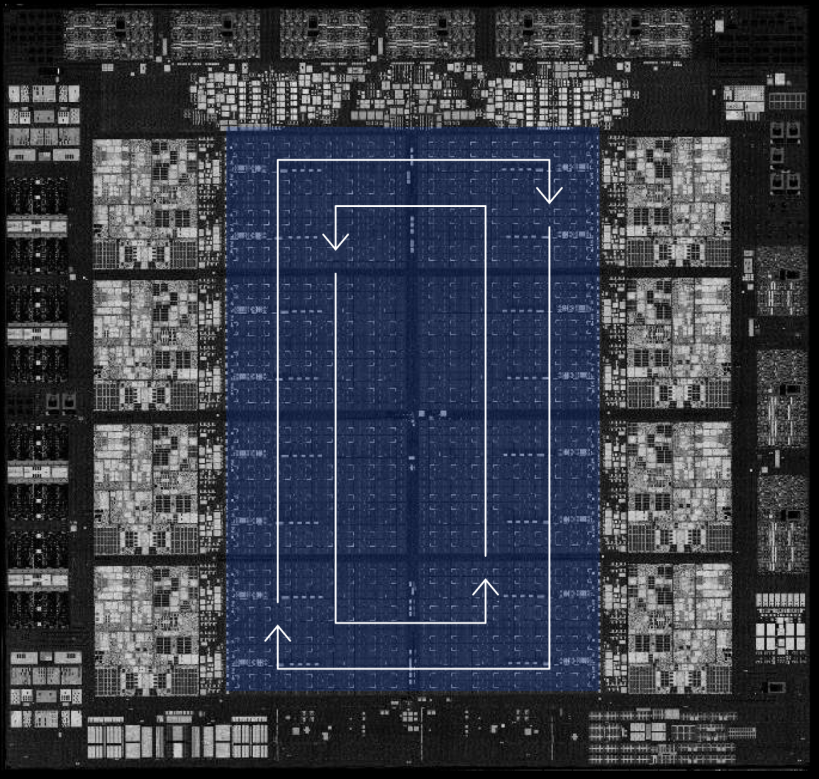 Recently, modular architecture has become popular in processor design. This is because a smaller die size can bring better yield in the chip fabrication. Thus, Sapphire Rapids uses EMIB technology to achieve a multi-tile design. The acceleration engine in each tile is one important part. It includes data streaming, quick assist technology, and dynamic load balancer, and supports common-mode tasks offload. 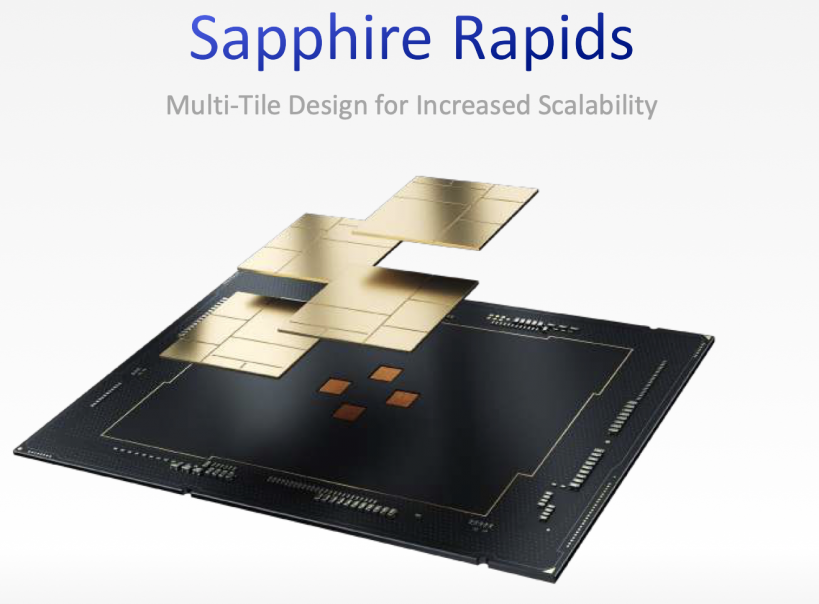 In addition, the shared LLC is also increased this time, and the HBM with 2 modes (flat or caching) are mentioned.

There are still many brilliant presentations that I cannot introduce all. For example, Samsung’s HBM2-PIM, the chiplet and 3D packaging, and etc. From this conference, I have learned a great number of inspiring ideas and technologies. I am impressed by their creations and efforts in achieving improvements. These new architectures and ideas show me popular trends in chip design fields and will help a lot for my own research.

Hello there, long time no see. This is mellow.
Just around 1 hour before writing this article, we had the this year’s final, 8th, study session for B3 students.

What are B3 study sessions

As we’ve already explained in the page For Prospective Students, Takizawa lab prepares various educational programs for students who are new to the lab.
This year, we welcomed three B3 and one M1 freshmen to our lab. Thus, we had the study sessions for these four freshmen.

In total, 8 study sessions were held this year with different and useful themes. 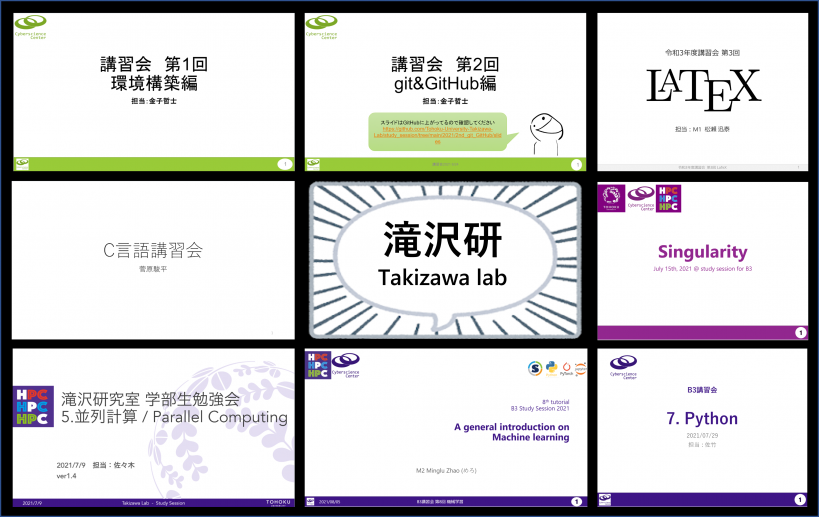 Hope what students have learned in these sessions can help with their further research activities in our lab.
That’s all here. Enjoy your summer vacation~

A welcome party was held at the end of June to celebrate the assignment of new B3 students.
Thanks to a fascinating web service, we still had a great time although the party could not be held face-to-face.

We are looking forward to seeing the B3 students play an active role in this lab in the future! 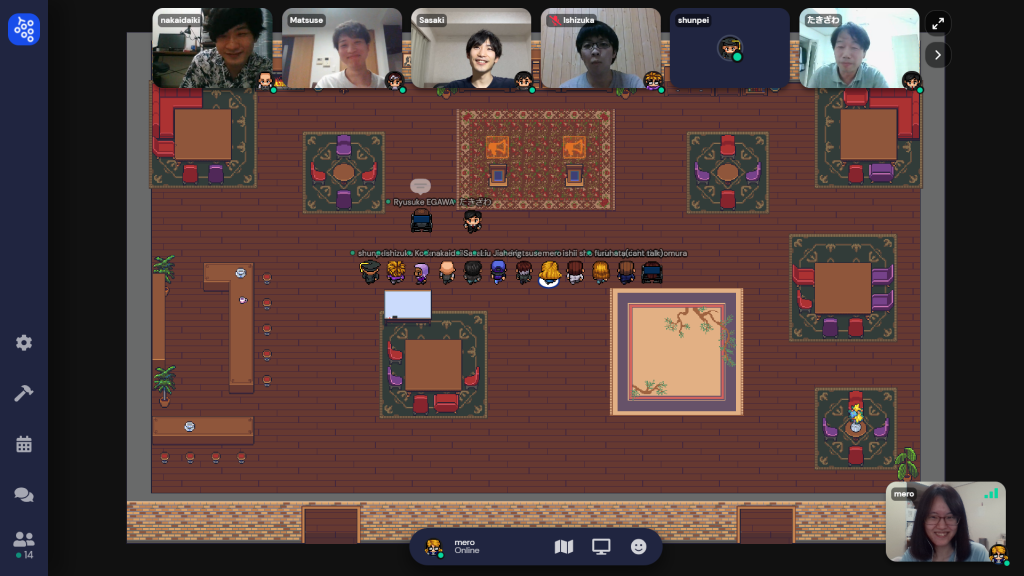